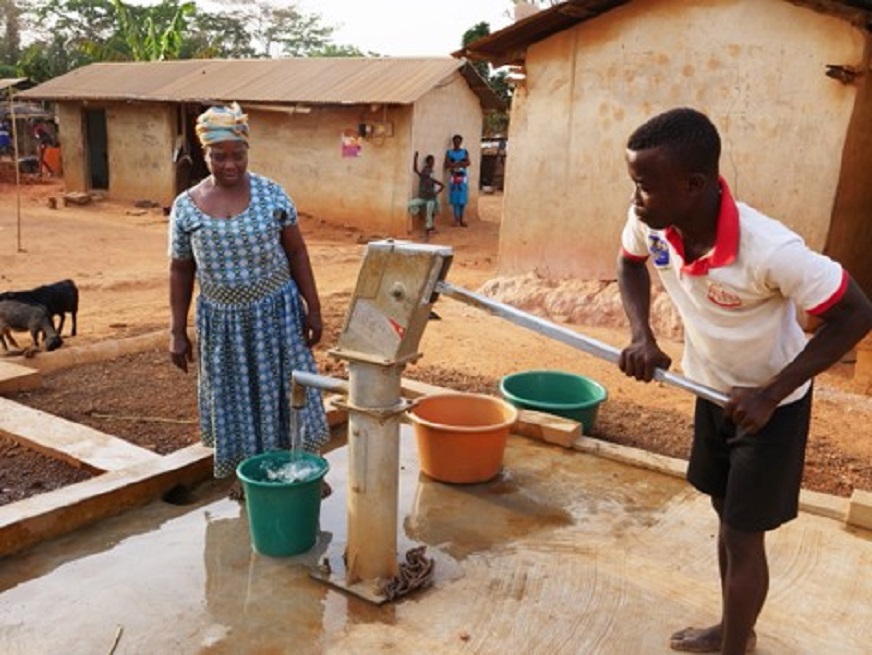 In March 2018 Janet Wilson was fetching water from the old well in Agravi village when a camera crew arrived and started filming. In the video posted on line, she can be seen – a woman in her early 60s wearing a yellow and blue headscarf – standing on the rim of the open well, pulling up water in buckets on a rope.

Later she can be seeing loading up her large container of water on her head and setting off up a steep hill about half a kilometre to her house – a long daily struggle for so many women in this community.

Almost exactly two years later in March 2020, Janet Wilson was filmed again in the same village in Asutifi North in the Ahafo region of Ghana. She is wearing the same yellow and blue headscarf and still collecting water. But this time there is no hill and no long journey. It is barely 50 metres from the new water point in the heart of the community to the water storage barrel at her house.

In the old days, she tells us the water sometimes dried up completely and they would have to sleep by the well waiting for it to fill. Then their legs became exhausted. “You needed to struggle just to get water. Today you can just walk a very short distance and you are okay.”

Janet Wilson is a personal example of how Asutifi North has become a beacon of hope for water services in Ghana. Agravi now enjoys one of the 22 new boreholes that World Vision drilled and completed during 2019, and – with the District Assembly – rehabilitating a further 34.

Partners are all working to a WASH master plan prepared under the ANAM initiative which brings together the district assembly, traditional leaders and development partners to achieve Sustainable Development Goal 6 – water and sanitation for all by the year 2030. The master plan has been integrated into the District Medium Term Development Plan – so that everyone works to the same agenda and aims.

Safe water coverage rose from just 4% in 2018 to 12% in 2019 and is set for another large rise in 2020. Safely managed services have doubled in urban communities. In total the partners have constructed 27 hand pumps and 9 limited mechanized boreholes and rehabilitated 34 hand pumps.

In Wamahinso, a larger peri-urban community, there was a mini riot in 2018 when the water tap ran dry after women had been queueing for hours. The women complained that their children had been unable to go to school. In 2020, when the cameras returned, the water point was tranquil. Everyone had collected their water and left. Water vendor, Rachel Adjeiwah, said: “We used to experience chaos, fighting and misunderstanding on whose turn it was to draw water. By the grace of God, the situation has improved… we now have peace.”

Wamahinso now has a limited mechanised small town water system providing safe water to more than 2,500 people, jointly funded (60/40) by the Safe Water Network and the District Assembly at a cost of US$ 60,000. Water is pumped from the main borehole into a backwash system and then to two 10,000 litre tanks where it is chlorinated and flows to five standpipes. The system began operating on 7 January 2020 and began selling water on 20 January. All the new systems sell strictly on a ‘pay as you fetch’ basis with a trained water vendor earning commission from sales.

Martin Agyepong, Safe Water Network Field Services Officer for the Ahafo Region, says that while a few people resisted a payment system, the majority have already been won over. In the first five weeks of service the new system sold more than 200,000 litres of water at a cost of 10 pesewas (US$ 0.017) for 20 litres.

In total the District Assembly and partners spent more than US$ 500,000 during 2019, the first implementation year, on new and rehabilitated installations. As well as bringing relief to the most deprived communities, there is a focus on water for schools and health centres. These systems also provide community water points where the water is sold to provide a fund for maintenance.

A number of innovations have been introduced during the ANAM Process to improve service delivery, revenue collection, learning and collaboration.

James Ata-Era, Asutifi North District Development Planning Officer, says that in the first year of implementation they chalked up successes, not only by increasing coverage, but also by communities taking greater responsibility for their systems. All new water systems come on condition that communities collect money under a “pay as you fetch” system to provide funds for minor repairs.  “The number of requests for maintenance of boreholes to the Assembly has reduced drastically. We used to get a number of requests: ‘Our borehole is down; our borehole is down!’ With this approach communities are now maintaining their boreholes. Even though it is only one year of intervention, we ourselves are amazed.

“What is driving the whole initiative is total political commitment and the dedication of the staff. The Assembly, together with the chiefs, are totally committed to the initiative. There is also a high level of commitment from our partners. We believe there is strength in numbers … people with lifelines coming together.”

Others agree. Jeremiah Atengdem, IRC water expert in the district, says: “We have laid a very solid foundation. We have a great partnership working well, very functional. We have great political leadership. The district chief executive is solidly behind this initiative and we have the community's commitment to ensuring that we protect these water facilities.” He points out that most of the new water infrastructure came into service at the end of 2019, so they expect a huge jump in terms of access to water services in 2020.

The District Chief Executive, The Hon. Anthony Mensah, has been commended for his commitment to the initiative. He says that meeting WASH targets is a commitment to implementing policies from the President and expects to be judged on how well they succeed.  “I am going to be measured based on my performance and part of it will be how I was able to deal with it for people to get potable and available water.” He notes that when he arrived in 2017 visitors to would arrive at his office with their own bottle of water to show him the low quality. This no longer happens.

Vida Duti, Country Director of IRC Ghana links the ability of staff and the Assembly to mobilise citizens with political leadership. “We have had the chiefs on our side; we have the people being re-orientated on the need to pay for the water services and to ensure the maintenance of these facilities. We see many more communities and households being moved onto safe water. So we think we are doing very well on the water side. I am very, very hopeful that we will even meet the target before 2030.”

Such optimism is reflected in the community. In Panaaba water problems have been longstanding and people sometimes had to travel two kilometres to fetch water from the Tano river. Several attempts to find a reliable supply failed until in June 2019 World Vision drilled a 48 metre borehole with a yield of 12 litres per minute and fitted a handpump.

Nana Atakora Amaniampong, Chief of Panaaba, is full of praise for the difference it has made in his community and the way the ANAM initiative is being conducted. “We are grateful to World Vision and the District Assembly. Panaaba is at the armpit of the district. Who would have recognised our need, let alone supported us? The District Assembly and its water and sanitation team have done so well. We really appreciate what they have done. “I live by this slogan.  ‘Where World Vision goes, water flows’.”

Can this success be replicated in other districts in Ghana? The District Chief Executive notes that five nearby districts are closely watching the initiative and expressed interest. Vida Duti is sure that the Asutifi North initiative to reach everyone with water and sanitation by the year of 2030 can be scaled up in many more districts. “We need to be intentional about aligning the partnerships in the various districts and ensuring that we also stimulate the political and technical leadership to drive the process.”

Dr Kodjo Mensah-Abrampa, Director General of the National Development Planning Commission, has followed the Asutifi North initiative from the beginning and he also sees it as a potential model. “Asutifi is not a special area in the country but it has become the Mecca for good water management and of how a team and a group can work together.”

When he visited Kenyasi town he saw how improved water management was having a knock on effect on other issues and even on economic activity. “You realise that this is different and this is the kind of thing we want to see. For NDPC we will take this up and use it at the front of our community interaction, our interaction with the districts, and our interaction with our development partners.”