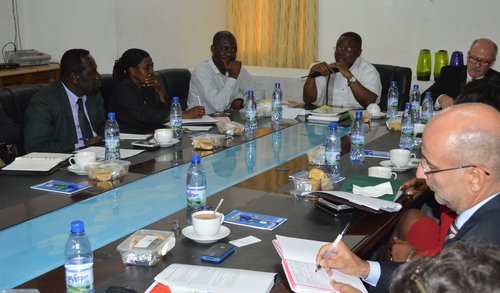 The heads of cooperation (HoCs) of multilateral and bilateral organisations in Ghana have paid a working visit to the Director General of the National Development Planning Commission (NDPC), Dr. Nii Moi Thompson, in Accra recently.

The visit, which lasted for over two hours, was organised at the request of the HoCs.  It gave the director general the opportunity to explain the President’s Transformation Agenda, the Ghana Shared Growth and Development Agenda (GSGDA II), as well as other development frameworks of interest to the international development community in Ghana.

The delegation was led by Mr. Jim Bever, country director of the USAID, and included representatives from the United Nations System, the African Development Bank, the European Union, Germany, Denmark, France, and the United Kingdom, among others.

Dr. Thompson fielded a number of questions from the delegation, including the relationship between the Ministry of Finance and the Planning Commission, the implications of an IMF programme for Ghana’s growth and development prospects, the role of the private sector in national development, and efforts being made by government to address weaknesses in development management.

He explained that based on directives from President John Mahama, the Commission was in the process of taking over the planning functions of the Ministry of Finance (previously known as the Ministry of Finance and Economic Planning) and that the two sides have met several times to determine the scope and nature of the transfer.

The transfer of functions, he said, “is meant to strengthen development management by more closely linking plans with budgets”, adding that ultimately all ministries, departments and agencies (MDAs) as well as Municipal, Metropolitan, and District Assemblies (MMDAs) will have to demonstrate that their plans and budgets are in line with national development priorities before they are funded by the Ministry of Finance.

The NDPC boss disclosed that a legislative instrument that gives the Commission the power to sanction MDAs and MMDAs that do not comply with planning and budget guidelines has been given the greenlight by the Attorney General’s Department and is ready for Cabinet.

With respect to the current IMF programme with Ghana, Dr. Thompson assured the delegation that it would focus mostly on short-term macroeconomic stabilisation, while the Commission would focus on medium-to-long-term economic growth.  “In this regard”, he added, “the Commission is working closely with the Ministry of Finance and the Bank of Ghana to ensure a successful programme”.

He cautioned, however, that the country’s development efforts would succeed only if they are driven by “extensive institutional reforms”, which he said NDPC is leading.

The leader of the delegation, Mr. Bever, expressed appreciation to Dr. Thompson and NDPC for granting them audience and hoped that the two sides would meet more frequently to share ideas.