Ghana risks losing its vital historical documents at the Public Records and Archives Administration Department (PRAAD) and the few research libraries in the country as a result of the deplorable state of the facilities.
Some of the national records, dating from independence, are discoloured and almost brittle.

The PRAAD, which is the national organisation that takes care of public records, archives and documents, has suffered neglect over the years.

This came to light when the Daily Graphic followed up to check on the status of historical documents at PRAAD after the Speaker of Parliament, Prof. Mike Oquaye, had, on October 2, 2018, indicated at an event that Ghana’s Independence Proclamation Document signed by the Queen of England could not be found anywhere within the borders of the country.

At the presentation of a dummy cheque for $1 million to the Ghana-India Kofi Annan Centre of Excellence in ICT by the Indian government on October 2, 2018, Prof. Oquaye had indicated that the document could only be found in the national archives of the United Kingdom.

He had attributed the loss to the poor record-keeping practices in the country.

A doctoral student, Mr Hermann W. von Hesse, who went to the PRAAD for research on September 25, 2018, stated on Facebook: “Documents at the Public Records and Archives Administration Department are fast deteriorating. Ghana risks losing irreplaceable historical documents. The state has neglected historical preservation in this country for far too long. Ghanaian politicians, wake up from your slumber!"

Reacting to the post, Nene Kofi Sammy said: "You should go to my former office, the George Padmore Research Library on African Affairs. Terrible."
In another reaction, Dela Kuma posted: "It was heartbreaking when I saw them."

Another reaction came from Ibrahim M. Fataka Imf, who stated: "Worse documents in the Tamale Archives; important documents have some parts torn away." 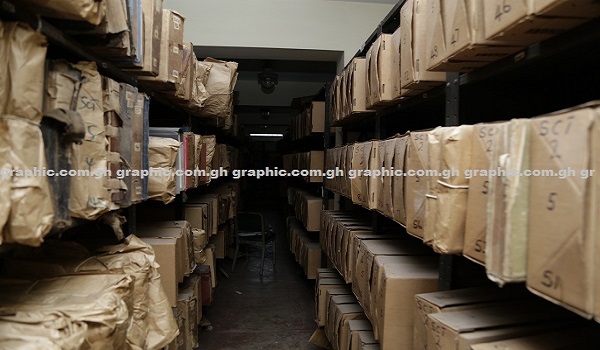 However, visits to the various units of the department confirmed the fast deteriorating state of documents lodged there.

The acting Director of the PRAAD, Mr Felix N. Ampong, in an interview on Friday, October 5, 2018, said the department had documents on the country dating back to a century and more.

On the Ivory Coast/Ghana dispute over oil exploration in the coastal waters, he said it was the PRAAD that provided the Attorney-General’s Department and the Ministry of Foreign Affairs and Regional Integration with historical documents that helped in the successful settlement of the matter.

"But I must say that they are not in good condition," he added.

The acting director described materials at the department as national treasure that needed to be safeguarded.

The acting director emphasised that the way to go was digitisation.

"Fortunately, this year the government has made available GHç1 million to start the process of digitisation. It is not much, but it begins the preservation of the materials.

"We have approached several donors but we have not been given the support because of the high cost of digitisation. But I believe it is the government that should take up the responsibility," he stated.

Mr Ampong said the increased investor confidence in the oil sector would not have been achieved but for credible records furnished by the PRAAD to successfully ward off contests.

Archives and the FOI bill

On the passage of the Freedom of Information Bill and the readiness of the PRAAD for that, Mr Ampong said although the department was a repository of information, it had not been consulted in that direction.

He said the work of information officers, as captured in the bill, was a duplication of the work of record officers at the ministries who liaised with the PRAAD in the administration of records.

He indicated that the department might not have the capacity to administer public records because it currently did not have officers in all institutions as it was supposed to be.