The United Nations Development Programme (UNDP) has called for concerted efforts to consider the special needs, concerns, knowledge and experiences of both male and female in climate change adaptation and mitigation planning, and implementation.

Not neglecting women’s voices in decisions and policy-making on climate change, according to the UNDP, is imperative for sustainable development.

Speaking at a National Validation Workshop to review a Gender Analysis Report of Ghana’s Nationally Determined Contributions (NDCs) Support Programme, Mr. Louis Kuukpen, Assistant Country Director of UNDP Ghana, noted that because women, especially those in rural areas depend heavily on the natural environment for water, fuel, and food production.

The livelihoods of these women, Kuukpen noted, are also mostly directly affected by natural disasters, environmental degradation and deforestation.

He added that evidence shows that in agriculture, climate change will worsen the existing barriers faced by women farmers in the areas of access to secured land tenure, agricultural inputs, financing, water, energy, infrastructure, technologies, and extension services, and hence the urgent need to mainstream gender into climate change planning and policy frameworks.

“The Paris Agreement called on parties to consider human rights, gender equality and women’s empowerment in all climate actions. So, we cannot talk about natural resources conservation without tackling the issue of women’s access to land, water management, disaster preparedness and without considering women’s rights and their well-being,” noted Mr. Kuukpen.

According to him, research indicates that, closing the gap in access to land and other productive assets for women would increase agricultural outputs by up to 20 percent in Africa.

Also giving a remark at the workshop, Ms. Levina Owusu, the Acting Chief Director of the Ministry of Environment, Science, Technology and Innovation (MESTI), emphasized that Ghana is already experiencing the impacts of climate change especially in key climate-sensitive sectors such as agriculture and energy.

This, she said, is greatly impacting women’s livelihoods negatively and which informed the development of the country’s NDC gender analysis report, being validated.

She stated, “it, therefore, became necessary to ensure that interventions aimed at mitigating and adapting to climate change impacts recognize and address the gendered effects of climate change.” 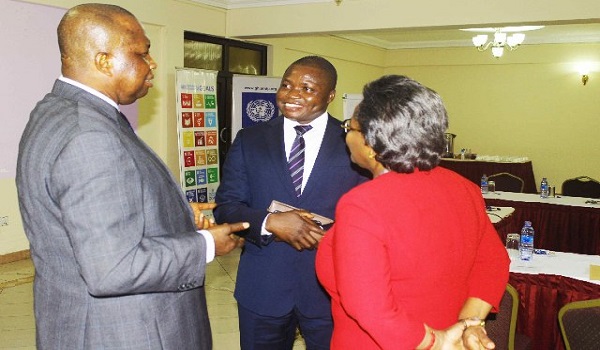 Ms. Owusu added that the gender analysis report was commissioned to better understand where women and men are situated in the two key climate change priority sectors (energy and agriculture); to examine barriers of women empowerment and their contributions to the sectors; and to identify the opportunities for policy articulation to strengthen the integration of gender equality into the country’s NDC planning and implementation, within the Ghana NDC Support Programme.

The NDCs are national climate plans highlighting climate actions, including climate-related targets, policies and measures what governments aim to implement, in response to climate change and as a contribution to global climate action.

It is a central element for implementing the Paris Agreement, which is an agreement within the United Nations Framework Convention on Climate Change (UNFCCC), dealing with greenhouse-gas-emissions mitigation, adaptation, and finance, starting in the year 2020.

The Ghana NDC Support Programme is being implemented by MESTI, in partnership with UNDP, with support from the German Government.

The programme aims to enhance the technical and institutional capacities of public, private sector and social actors to scale up mitigation actions that support NDC implementation in Ghana.

It also seeks to integrate gender equality in NDC planning and implementation processes within the broader sustainable development context.