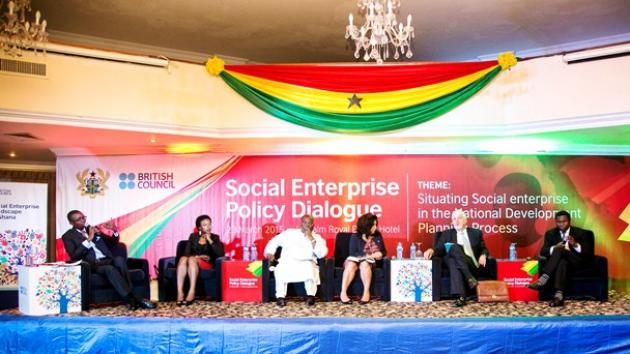 The National Development Planning Commission (NDPC) in collaboration with the British Council, launched a research report on Social Enterprise landscape in Ghana at a policy dialogue on 23rd March, 2015 at La-Palm Royal Beach Hotel in Accra.

The research sought to address the existing and emerging developments in social enterprise with specific focus on the enabling environment for social enterprises, including legislation, policy and regulations. It also looked at the identities and profiles of the enterprises and entrepreneurs in Ghana, capacity- building initiatives, grassroots innovations and breakthroughs and awareness and visibility of social enterprise and the attitudes and perceptions of national and international influencers and other stakeholders, including the public.

Dr. Nii Moi Thompson, the Director General of NDPC who doubled as the chair for the dialogue in his statement, revealed that the social enterprise should not be seen as an ultimate solution to unemployment but a compliment and one of the several ways to help eradicate the problem.

He further disclosed that there is the need to change the measurement used in researching unemployment rates in Ghana, as citizens who petty trade or buy and sell are considered as being in gainful employment.

He said, research has shown that about 85% of Ghanaians work in the informal sector (petty trading/ buy and sell) to fend for themselves, mostly in bad conditions. This has attributed to the minimal rate of unemployment in Ghana. The Director General reiterated that Ghanaians petty trade because Ghana does not have systems where its unemployed citizens are paid benefits.

The Director General said the NDPC is working closely with the Presidency on the unemployment situation in the country. To that effect, a report has been submitted to parliament for discussions and the document has also been incorporated in the Ghana Shared Growth Development Agenda II (GSGDA II).

The British Council Director, Liliiana Biglou, OBE, who was also present at the occasion, disclosed that the research was conducted by Overseas Development Institute (ODI). She said her interest in the research heightened when she visited Kenya and found women living in slums and yet made use of scarce resources available to them and produced beads among other things.

She revealed that the British Council is keen on promoting an enabling environment that will allow social enterprises to thrive.

The Minister for Trade and Industry (MOTI), Dr Ekwow Spio-Garbrah revealed in his keynote address that his ministry is very interested in the social enterprises because it's an avenue to create employment so as not to have unemployed graduates associations. He further stated that NGOs and Social Enterprises are very important because they create jobs as the public service is unable to employ due to obvious reasons.

Though the research did not capture interventions made by the MOTI with regards to social enterprise, the minister ceased the opportunity to talk about a few. He said the African Development Bank funded the Rural Entrepreneurship programmes which has created employment for rural folks.

The African Business Centre for Development Education (ABCDE) is another intervention which seeks to bridge the gap between academia, industries etc. The ABCDE takes back our professionals into the classrooms to impart on the field knowledge/practical knowledge to students for them to be abreast with latest trends so as to be professionally informed.

Dr Spio-Garbrah opined that the unemployed graduates is as a result of the structure of our academic curricular. He says it doesn't allow graduates to be innovative but rather prepare them for salaried jobs.

He however advised all present who are doing well in their respective fields of endeavour to go back to schools to impart practical professional knowledge to help students make informed decisions and be innovative.