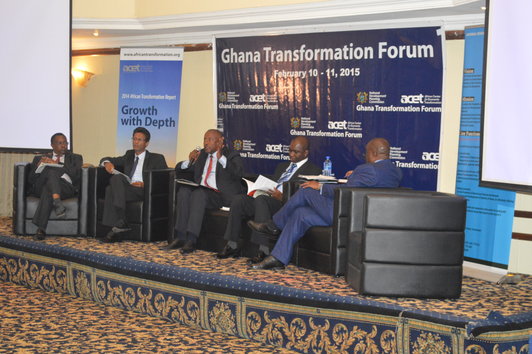 A two-day conference has been organized by the National Development Planning Commission in collaboration with the African Center for Economic Transformation (ACET) on Ghana’s transformation.

The Chairman of the National Development Planning Commission Dr. Kwesi Botchwey who spoke to a gathering of over 100 national and international leaders, economic planners, and government and business leaders at the La Palm hotel in Accra, said: “The transformation agenda is at the very heart of national development strategy for the future. Dr. Botchwey further stated that Ghana’s new coordinated programme of economic and social development policies referred to as  Agenda for Transformation would provide a long-term development framework and prevent the cycle of crisis the country continues to experience. “We have series of short-term crises because we have failed to plan for the long-term.”

On his part Dr. K.Y. Amoako, President of ACET, pointed out that Ghana has an exceptional history, valuable resources, and proven successes on which to chart a new path forward. Dr. Amoako continued, “the government has devised, for the first time, a national transformation agenda. ‘We’ve had long-term development plans and economic action plans before, but never within the framework of economic transformation.” He added: “Our goal is to build a coalition for transformation involving all key segments of society, and to agree on some immediate actions towards Ghana’s development objectives.”

The following major topics formed the reference points for discussion during the forum and these are: energy, export promotion, labor-intensive light manufacturing, local content, skills development, and tourism.

The Forum brought together researchers from the private sector, government, and other think tanks. To add perspective to the discussions, leaders from four African countries—Ethiopia, Mauritius, Kenya, and Rwanda were there and shared their experiences on their own transformation journeys.

One of the speakers was UNIDO Goodwill Ambassador Ms. Helen Hai, CEO of the ‘Made in Africa Initiative’ who recounted the extraordinary story of how she led the establishment of the Huajian shoe factory in Ethiopia, which began exporting to the United States in just three months and employed more than 3,000 Ethiopians after two years of operation.

She argued that a time has come for Africa to become a global manufacturing base in the near future. But for that to happen, she said, Africa’s leadership had to live the transformation message and seize the initiative.

On his part Mr. Getachew Adem, Deputy Commissioner of the National Planning Commission of Ethiopia, outlined how his landlocked country had registered double-digit economic growth figures over the past decade, while Dr. Julius Muia, Executive Secretary of the National Economic and Social Council of Kenya, described how enormous infrastructure investments in his country were transforming the economy and improving lives.

Dr. Ramesh Durbarry, Professor in Tourism and Deputy Director, Academic and Partnerships, at the Amity Institute of Higher Education in Mauritius, recounted how his island nation has achieved great success in promoting sugar, tourism, real estate, export-processing zones for textiles, and offshore financial intermediation through a flexible, pragmatic approach.

Dr. Uzziel Ndagijimana, Minister of State in the Ministry of Finance of Rwanda, described the greatest transformative story in recent times of how the Central African country, virtually destroyed after the 1994 genocide, has now become one of the continent’s shining economic stars.

Wrapping up the forum, Dr Amoako quoted journalist Thomas Freidman, who has warned: “Countries that do not plan for the future tend not to do well there.”

As part of the programme the National Development Planning Commission mounted an exhibition to showcase the programmes of the NDPC.